Display Energy Certificates (DECs) were introduced as a requirement for buildings occupied by a public authority as part of the implementation in England and Wales of the European Directives 2002/91/EC and 2010/31/EU on the energy performance of buildings.

Originally the requirement was for buildings larger than 1,000m², however this was later reduced to 500m² and from 9 July 2015 has applied to any public authority occupied building larger than 250m² and frequently visited by the public.

The purpose of DECs is to raise public awareness of energy use and to inform visitors to public buildings about the energy use of a building. They display to the visiting public how well (or not) the energy efficiency of the building is managed. DECs are a highly visible way of making the public sector accountable for how wisely it spends the public’s money.

DECs provide an energy rating of the building from A to G, where A is the most efficient, and G is the least efficient. They are based on the actual amount of energy used by the building over the 12 months preceding the validity period of the DEC.

An affected organisation must display a DEC in a prominent place clearly visible to the public and have in its possession or control a valid advisory report. The advisory report contains recommendations for improving the energy performance of the building.

A DEC and recommendations report are required for buildings with a total useful floor over 250m², which are occupied in whole or part by public authorities and which are frequently visited by the public. A building in the context of these regulations includes a part of a building which has been designed or altered to be used separately.

The regulations only apply to buildings, with a total useful floor area greater than 250m², occupied by a public authority and frequently visited by the public. However, any other organisation that does not need to display a DEC, may elect to do so on a voluntary basis. DECs are an effective key performance indicator and means for an organisation to display its environmental commitment. 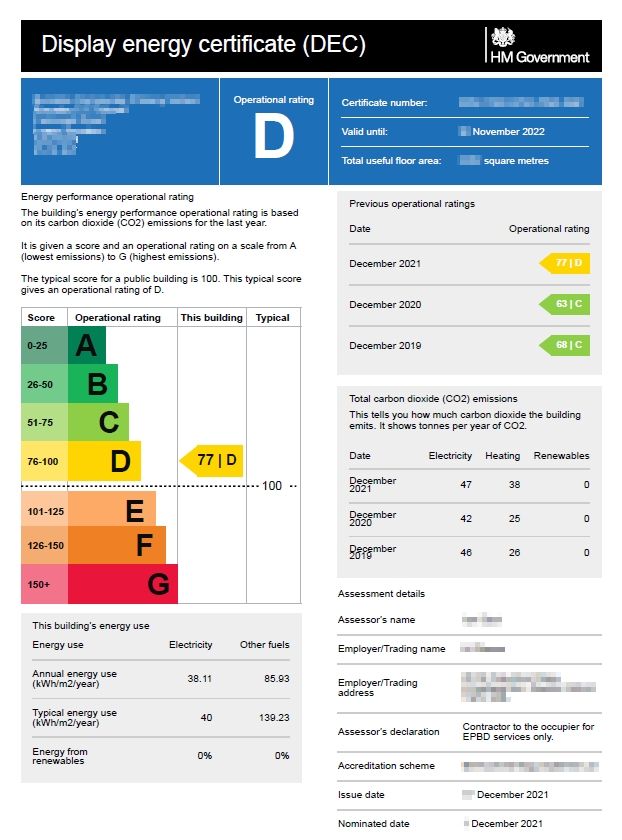 If you are a new occupier, you should compile records of your energy consumption over the first 12 months and your DEC should be produced and on display within 15 months of the date of first occupation.

Only producing DECs once every 10 years is widely considered to be insufficient as their greatest value comes from demonstrating the change (hopefully improvement) in energy efficiency year-on-year. For this reason, occupiers who are significant energy users are strongly encouraged to renew their DECs annually, even if the building is below 1,000m² useful floor area.

The operational rating displayed on a DEC is a numerical indicator of the actual annual CO2 emissions from the building compared to a typical use benchmark so that the performance of one building can be compared with that of another.

The rating is calculated according to the methodology defined in the DEC software specification using a software tool which has been approved by the Secretary of State. This must be done by an accredited energy assessor.

Use the Find A Member button at the top of the page to locate your nearest DEC assessors.